Warning: include(./headermain.php): failed to open stream: No such file or directory in D:\xampp\htdocs\hadelmia.com\update\index.php on line 5

This is a first part of the new graphical look.
Next update will contain new NPC and monster graphics.
This update contains:
-New graphics for weapons and armors, both inventory and character (Thanks to Nicola for the new GFXs).
-Lots of new land tiles (Handmade by me :D).
-Fixed volume control errors.
-Changed music format to OGG (files are about 3 times smaller).
-Capped FPS to 30 (no need for more and saves CPU).

Nicola just joined to the team as a Pixel Artist. Looking forward to this! And thanks for the Sponsor!
Also version RC1.7 is now more stable, faster and swarm of login issues which came with a TLS encryption seems to be solved.


Testing continues and lot of improvement.

Tons of testing has been done, and server performance and stability has been improved a lot!
Thanks to active testers i managed to get from the Reddit.

-Spell progression window postition and size saving.
-Fixed returning of the last quest on the quest line.
-Spell mastery progression.
-Fixed couple of gfx glitches.
-Fixed character coordinate saving when logging out.
-Server initial load time is now about 10 times shorter.
-Finally fixed the server freeze bug (at least one of them).
-Fast try to fix bug when crafted item goes to head slot.
-Fixed too large font on chat bubbles, also general fixes to bubble sizes.
-Small font and style changes.
-Testing new font, should be very clear and good for eyes not with so good sight anymore.
-Fixed perk point bugs.
-Fixed trade window appearing to random people when it shouldn't.
-Some server bug fix tests.
-Show corpses after login/re-login.
-Use double buffering to reduce flickering and to improve performance.
-Couple more server crash bugs fixed.
-Login should be now even faster.
-Try to fix server freeze bug(no guarantees, it works).
-Fixed other player selection.
-Fixed level up to actually save it to server database.
-Adjusted moving speed of some monsters.
-Some server performance improvements.
-Server stability fixes (need more tho).
-Fixed level up screen and level up system.
-Fixed bank vault.
-Nicer hints.
-Client down and up buffer is now 4 times larger (Does it help? I really dont know yet).
-Some minor stuff.
-Fixed boss spawning.
-Fixed bounty quest generation database saving.
-Fixed case when only 1 gold was shown in a loot, instead of a stack.
-Fixed wrong lightlevel after you die in dungeon.
-Added Wrestling skill that increases your dodge chance by 2% per level.
-Remade other player characters memory handling (takes much less memory now).
-Fixed blinking mob names in combat.

if you are interested to try out how server works under more stress.
At this point, information about server performance is important. It has not been tested properly yet. It should be quite stable, but how it acts when there is much more players online, is unknown. 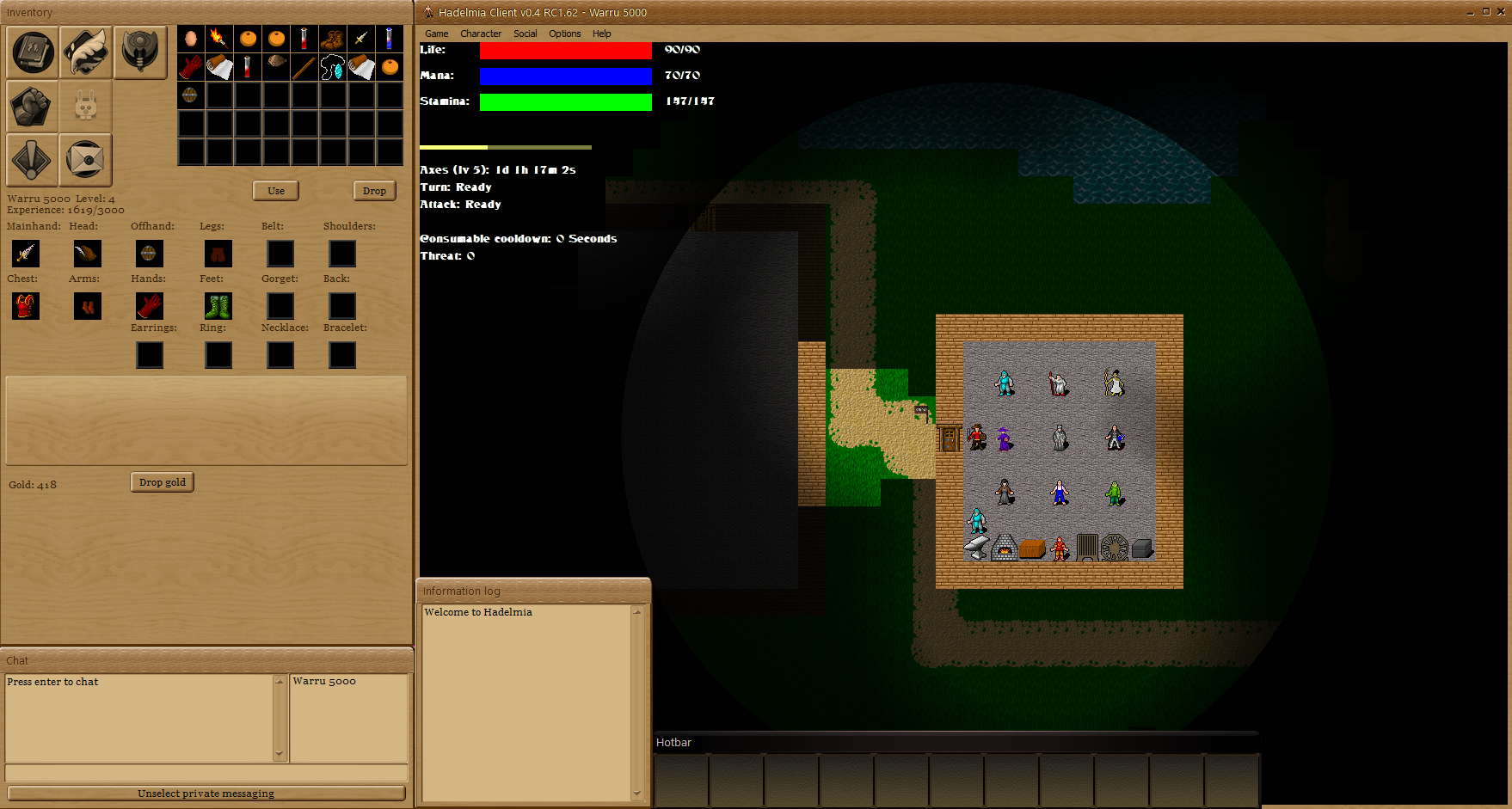 UI saving is now on.
04.05.2019
You can now resize and move most used windows's in the game, and it will save their position and size.


Forums up!
04.05.2019
Forums are now up and running, it is goo place to keep track of ideas, bugs and just to talk some random stuff if you like.

I started to make windows/forms resizable and free movable. It is working quite well already, but there is no position and size saving yet. 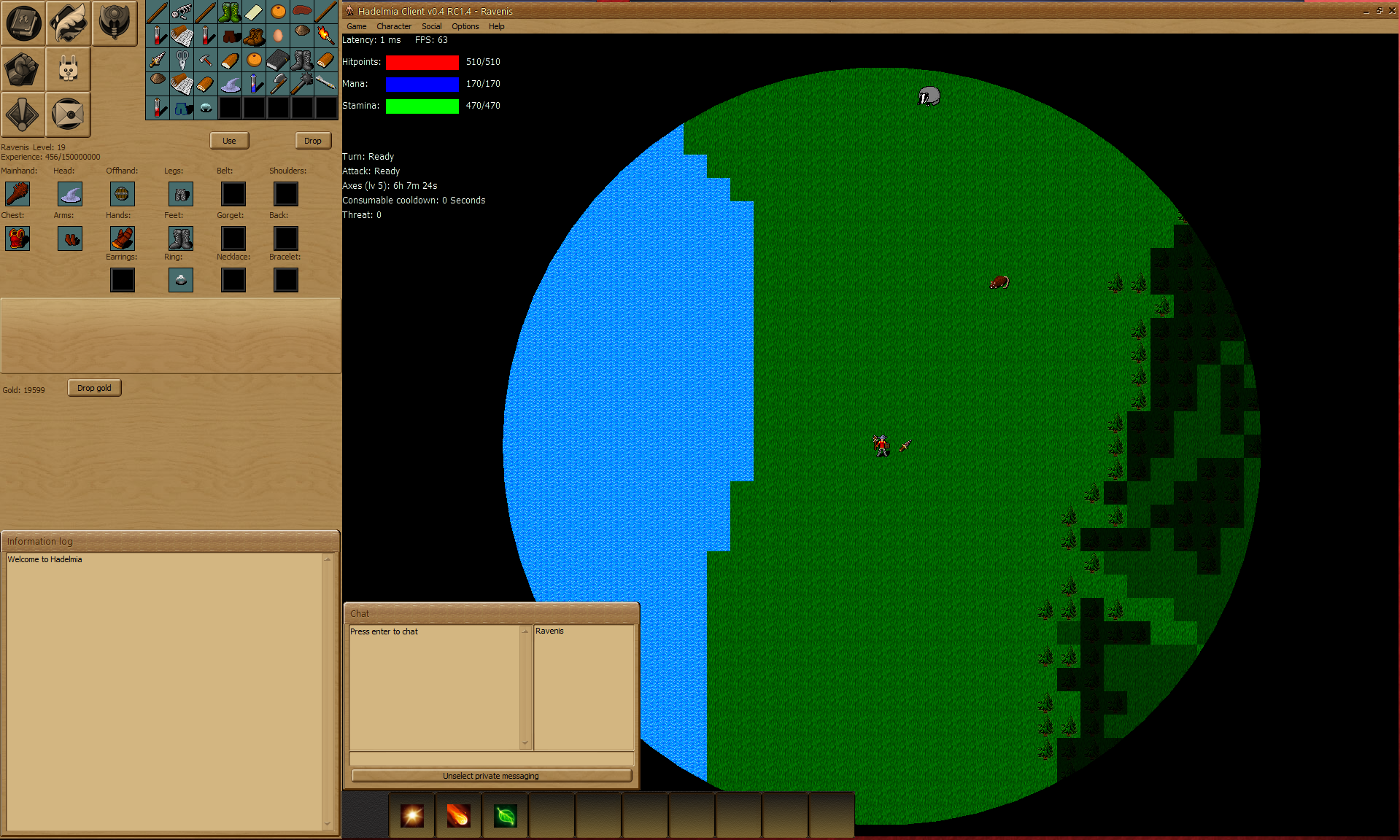 
0.4 alpha release candidate 1.1
22.04.2019
Again, a lot of stability and preformance improvements, with huge pile of bug fixes.
Also new sound system is now implemented, along some testing sounds (few different moving sounds for players and mobs.
FPS is about a double compared to last version, overall speed is now much better.
Login server and login session generally is now stable, and is like 5 times faster.
Some small and big bugs are still expected, they always are, but now Alpha release is very close.

Last thing before Alpha is to make some basic configuration files for settings like sounds, window positions, sizes etc...

You can check this screenshot about my sheep meanwhile! She's very productive wool factory. 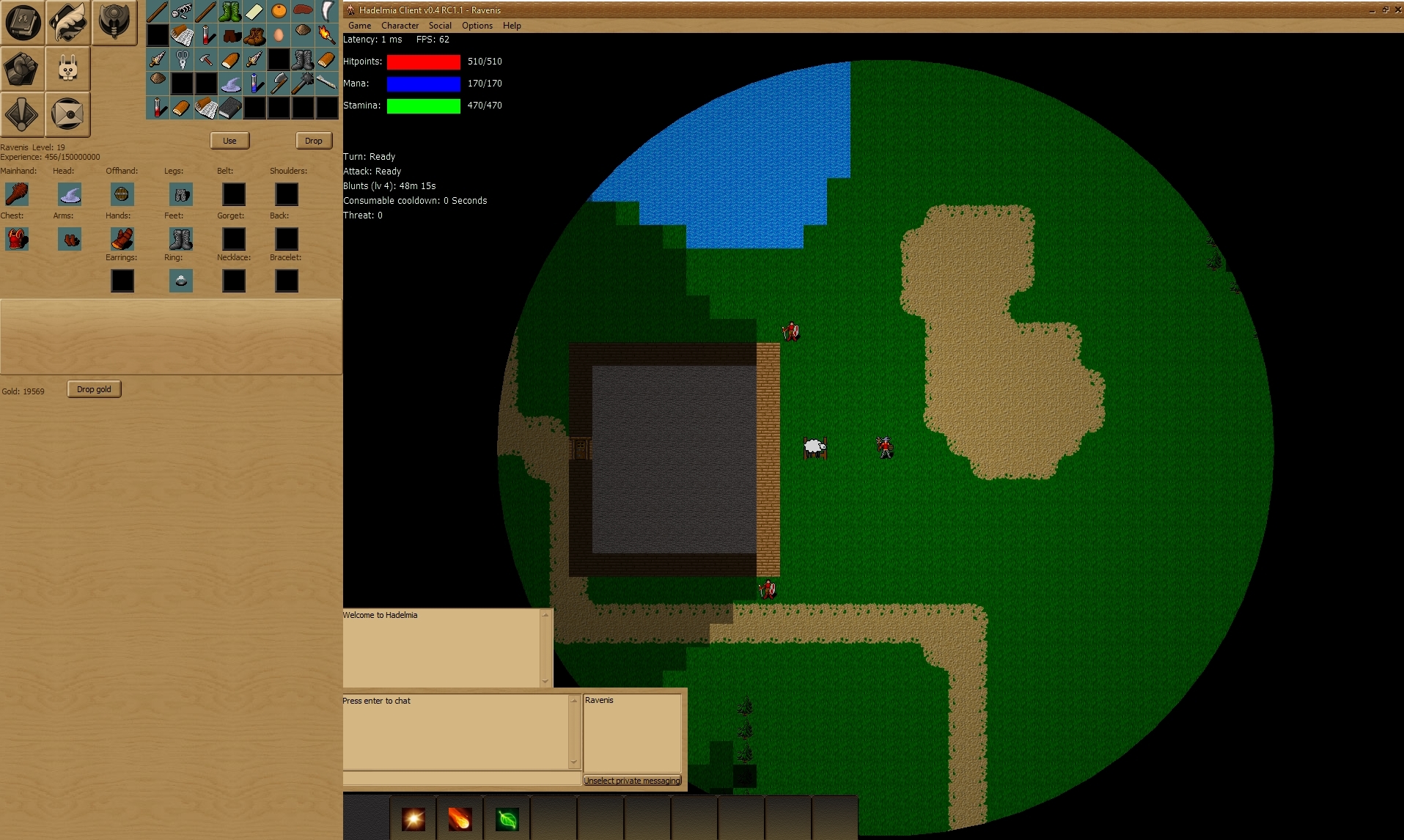 Stability and performance
23.03.2019
Lots of performance tweaks and stability fixes, both on server and client side.
I know it is still not alpha, but server particularly was way too unstable and slow for it.
So i decided to take some time to improve it.

That is all we need for the alpha anyway.
I just need to implement it to actual game. It shouldn't take too long. 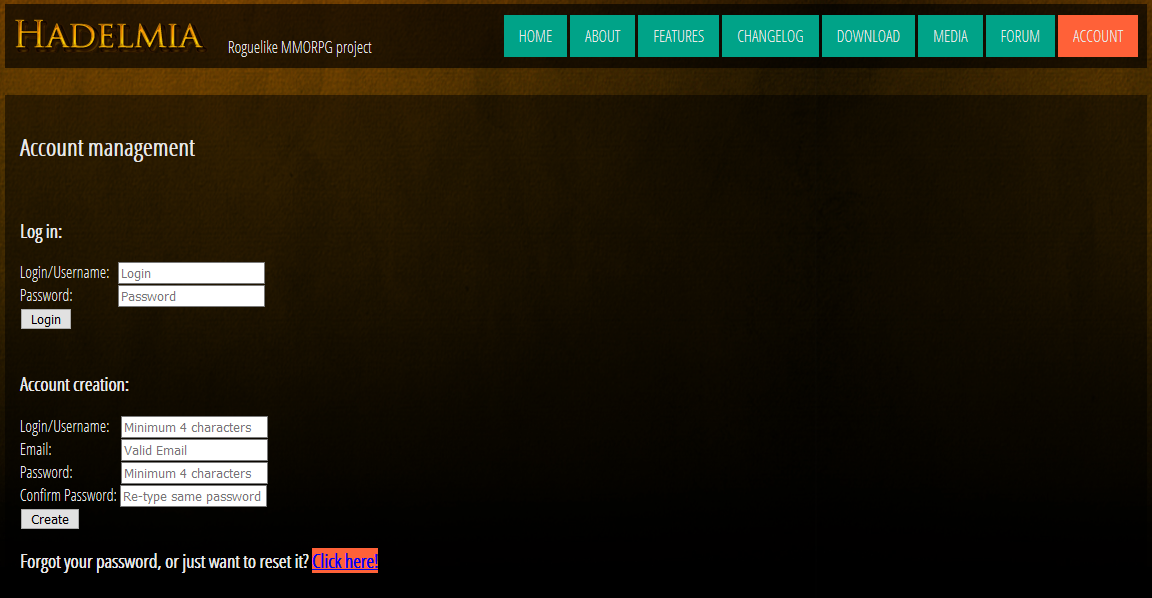 There is also no the page where you can check server status.

If everything goes smoothly, alpha will be out in couple days.
There will be full account and character wipe also for the alpha.
Final thing before the launch to be made is the new account system anyway (this means, autoaccount will be removed and password added to accounts).
So i hope everyone is up for some testing, and will find last bugs, and problems to be solved before 0.4a.

Added some nice graphical stuff like lights and LOS calculated by them. 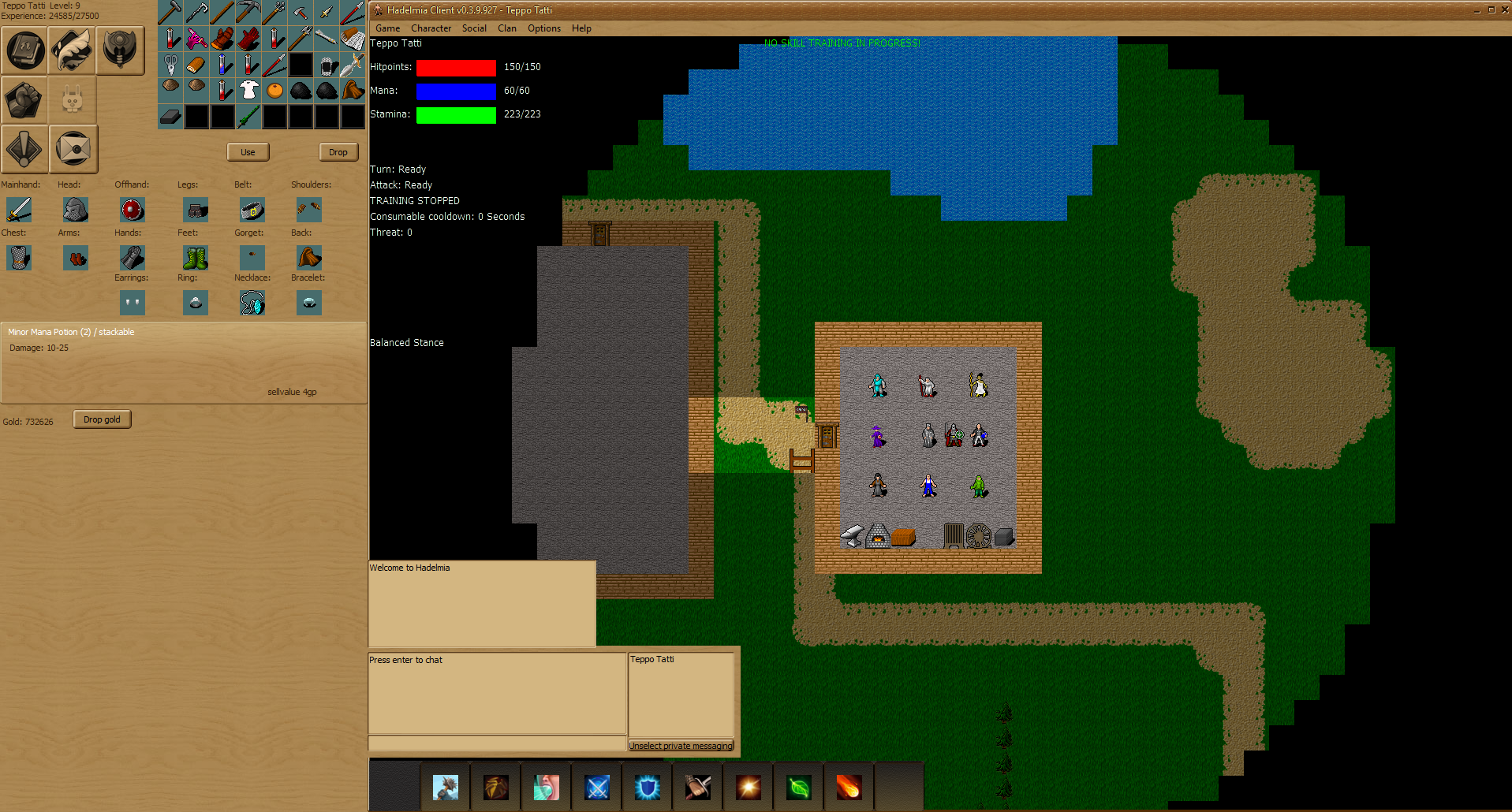 New UI visual look, wooden theme. Gives a nice touch to the UI and is much better than the very depressing total black and blunt style.
Loads of improvements to the UI generally.

First phase of the living world A.I. (Random camp making done)
The meaning of living world is to make the world run independently, imagine a situation where you are a thief looking for the opportunity to steal something.
Well, with the living world AI you can do that.
Scenario: You see orcs in the woods, they are just about to make a camp and get some sleep. Orcs will actually make that camp in the spot they are currently in.
They will make camp fire, put sleeping bags in place, also put some items in their stash chest (chest is your target ofcourse).
You can now wait until most of the orcs are asleep, they will leave guard in place too for sure.
But maybe you shoot that guard with a tranquilizer dart, and wait till he/she is asleep too, or wait until the guard is making his/her patrol, and is out of sight. Then you use the stealth ability to make your way to the stash.
The stash is maybe locked too, or not, you never know. If it is, you need to lockpick it too. Maybe you will fail and make some noise and some of the orc or orcs will hear you doing it, and you know what happens then. You probably need to run and vanish in the darkness.
But after a successful lockpicking, you can get nice loot with little trouble. Nice scenario is it not? :)

This is just one cool feature the new living world AI will provide. Everything in the game will be done by AI, nothing will be scripted, ok, scripting provides very complex and cool looking scenarios, but generally it is just repeating same thing all over again.
Living world will not repeat anything basically.
This is a very ambitious goal to make work, but it is a unique feature to have.
It will be lot of work, but I'm confident to be able to make it work.
Stay tuned here or on discord for more info!.

Warning: include(./footer.php): failed to open stream: No such file or directory in D:\xampp\htdocs\hadelmia.com\update\index.php on line 281

Warning: include(): Failed opening './footer.php' for inclusion (include_path='D:\xampp\php\PEAR') in D:\xampp\htdocs\hadelmia.com\update\index.php on line 281